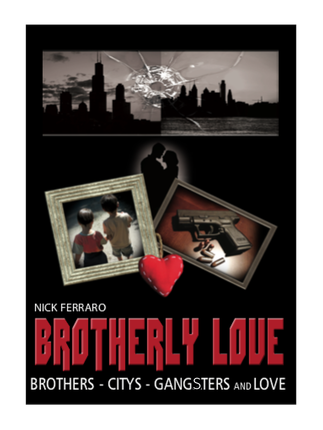 BROTHERLY LOVE
A Feature Film
​written by Nick Ferraro
​directed by Ronnie Marmo
produced by Lou Martini, Jr., Toni D'Antonio, and Nick Ferraro
​co-produced by Ronnie Marmo and Samantha Bowen
On the lam, in over their heads and out of their wits, two wise guy brothers learn to trust each other to survive.
​This will take a lot of...BROTHERLY LOVE.
This buddy mob dramedy is a twist on a classic story that will leave you laughing and rooting for the “not so bad” guys. On an adventure to save their lives, two wise guy brothers try to right some wrongs, face some truths and learn the true definition of Brotherly Love. But like any good wise guys, their bad luck doesn’t run out and a series of botched incidents lead them on an adventure that reveals secrets and tests the very foundation of their relationship.

Wrought with suspense, drama and comedy, this is a great film in the likes of Analyze This, The Family, The Whole Nine Yards, Married to the Mob and Midnight Run. As lies surface and motives are questioned, the brothers, who don’t see eye to eye, end up on the lam, in over their heads and out of their wits. Trusting each other to survive will take a lot of Brotherly Love.
Full pitch available.