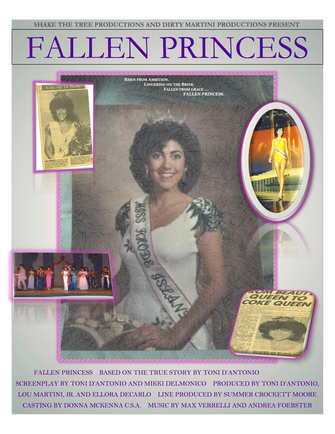 FALLEN PRINCESS
A Made-For-TV Movie
story by Toni D'Antonio
​written by Toni D'Antonio and Mitch del Monico
produced by Toni D'Antonio and Lou Martini, Jr.
co-produced by Samantha Bowen
Risen from ambition. Lingering on the brink. Fallen from grace ... FALLEN PRINCESS. ​
This is a series of events leading to the destruction of a state beauty queen in the Miss America Pageant.  It's a story filled with drama, betrayal and ultimately, redemption.  A moment-of-truth story, FALLEN PRINCESS follows the rise and scandalous fall of a talented and wildly ambitious young woman.  This heartbreaking and rousing account of factual incidents will educate both parent and child and will also enlighten the viewer about current pressures placed on youth in the spotlight.

The experience is painfully immortalized in sensational, national headlines "FROM BEAUTY QUEEN TO COKE QUEEN" (NY POST).   The life lessons and courageous struggle to regain acceptance will move and inspire you.
Growing up middle class with all the advantages that entails, Vicki D’Amato, class President, Cheerleading Captain, straight A student, is crowned Miss Rhode Island. As the pressure builds in preparation for Miss America, family, friends, the Pageant Committee and staff think she will put RI on the map and have a good shot at top ten and a Talent Award win. When September and Atlantic City come and go, Vicki takes home nothing. Not a single trophy or honorable mention.

​This once bright shining star, embarrassed and devastated, gradually descends in to a world of drugs and alcohol. No one realizes the destructive route she is on until a shocking 3am phone call to the D’Amato home; Vicki, having left a nightclub drunk and alone, has been beaten and raped at the hands of a madman. Unable to face her problems, her downward spiral continues and she further escapes with wild parties, a questionable crowd, a new hard-partying boyfriend and cocaine. One fateful night leads to an arrest for possession and a once promising young beauty queen and aspiring entertainer must face her inner demons. Seduced by the pursuit of fame and the influence of drugs, will she be just another casualty of a childhood lost and a dream deflated? A true story of redemption, Vicki’s journey is as heartbreaking as it is heartwarming.