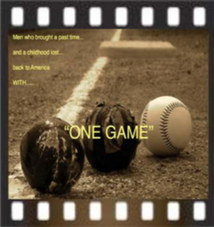 ONE GAME
Full-Length Feature Film
written by Mark Dobies
produced by Toni D'Antonio, Lou Martini, Jr., and Mark Dobies
Heroes who brought a pastime back to America with ONE GAME.
An adult "Disney-esque" journey in the vein of films by Ron Howard and Robert Redford, One Game follows 22 of the best baseball players ever assembled, in search of the purist game ever played. It fields a timeless tale where true heroes once again touch our hearts. At a time when our dreams seem so elusive and hope all too often dies, One Game recaptures our imaginations and places it on the broad shoulders of twenty-two selfless men fighting for something more than a few fleeting moments of glory. A narrative that weaves America’s Pastime into our hearts and sets ego and fame aside as the label “Hero” is rediscovered.  Watch these men bring a beloved pastime back to America with...ONE GAME.