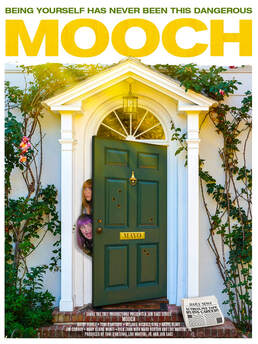 MOOCH
A TV Series
​written by Jon Saks
directed by Richard Kline
produced by Toni D'Antonio, Lou Martini, Jr., and Jon Saks
​co-produced by Samantha Bowen
Mooch...Being Yourself Has Never Been This Dangerous!
A unique, hilarious journey of two city slicker sisters on the lam, but for two very different reasons. Claire Sinclaire (Kathy Searle) is struggling through a career drought and Valerie "Mooch” Muccinelli (Toni D’Antonio) is forced into a mandatory relocation, all in the middle of a pandemic. These two sisters have no idea what’s in store when quarantine is lifted.

Post quarantine, an embarrassing viral video further derails Claire’s acting career driving her to go into hiding with the only person she can trust, her estranged sister, Val, a former ex-mob wife hiding in the witness protection program. How their worlds collide in the middle of Anywhere, USA, along with its cast of crazy supporting players, this series will create a tremendous ensemble of high-jinx and comedy. And with a road trip on the horizon and the mob hot on their tails, Claire and Val’s adventure will spark laughter and excitement for multiple seasons.

Famous actress with a pee tape? Check. Ex-Mafia wife in Witness Protection? Check. On the run from the mob? Check? Hilarity? Most definitely.

A new, fun mash-up of the likes of Thelma and Louise, The Heat, The Sweetest Thing, Frankie and Grace, My Blue Heaven, and Two Broke Girls.

The wit and imagination of Jon Saks' words will surprise and delight audiences.

MOOCH. Being yourself has never been more dangerous.