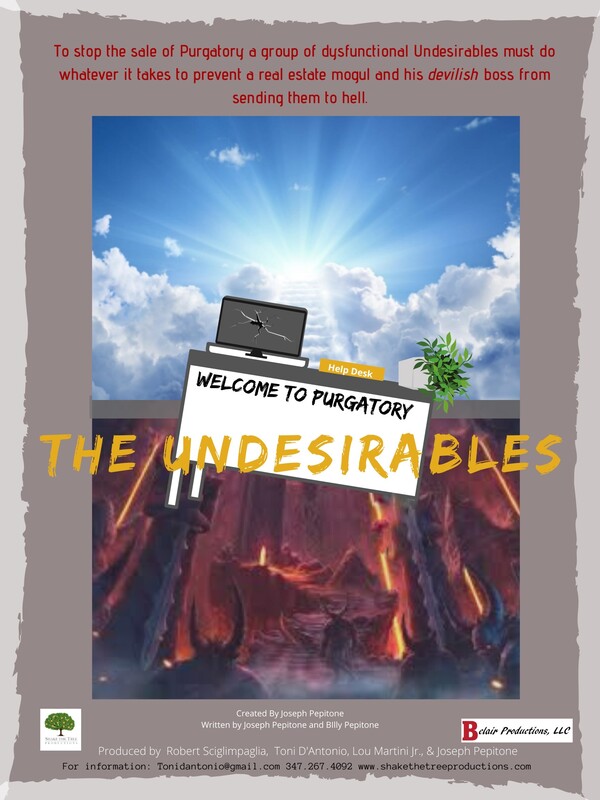 THE UNDESIRABLES
A TV Pilot
written by Joseph Pepitone and Billy Pepitone
​directed by Joseph Pepitone
produced by Toni D'Antonio, Lou Martini, Jr., and Joseph Pepitone
executive producer Rob Sciglimpaglia / Belair Productions​
EIGHT 22-MINUTE EPISODES AVAILABLE.
Can a dysfunctional team of Undesirables make Purgatory great again?
To stop the sale of Purgatory a group of dysfunctional Undesirables must do whatever it takes to prevent a real estate mogul and his devilish boss from sending them to Hell.
​
MICHAEL CHEEVERS is a slacker who has spent the last ten years of his life working in a mailroom. He has no drive, ambition or potential. After a night of drinking, he accidentally kills himself in a bizarre sexual experiment gone wrong.

Michael finds himself in Purgatory and is “greeted” by SHANNI SMITH, a sassy secretary with a high opinion of herself and a low tolerance for everyone else, and MARTHA MAGDALENE, a no-nonsense Human Resources manager. After they give Michael a very unwelcoming welcome, he meets with the recently demoted ST. PETER and is told that despite being a decent guy, his wasted potential and laziness are the reasons he has been sentenced to Purgatory. Michael is assigned to the mailroom under the supervision of Office Manager BROOKE LYNNE MONROE. Brooke takes a liking to Michael and the two become fast friends.

Brooke tells Michael about FRANK SIPPERELLI, an evil real estate mogul who has a bitter rivalry with St. Peter and a close relationship with the Boss’s Son, JESUS, who “runs” Purgatory. Frank plans to buy Purgatory, so he can shut it down and turn it into a vacation spot for affluent “Heaveners.”

Michael comes up with a series of plans to stop Frank from succeeding and to impress Brooke.  But every time he seems ready to make his move on her, something or someone gets in the way. And when boy band leader, LISANDRO shows up, Brooke falls hard, causing friction between Michael and her.

One of Michael’s ideas, a raucous date auction, raises enough money to stall Frank’s plans but when the office Christmas party angers birthday boy Jesus, the Undesirables find themselves in the doghouse. Frank is free and clear to move forward with his plan and when his benefactor is revealed, all Hell breaks loose.